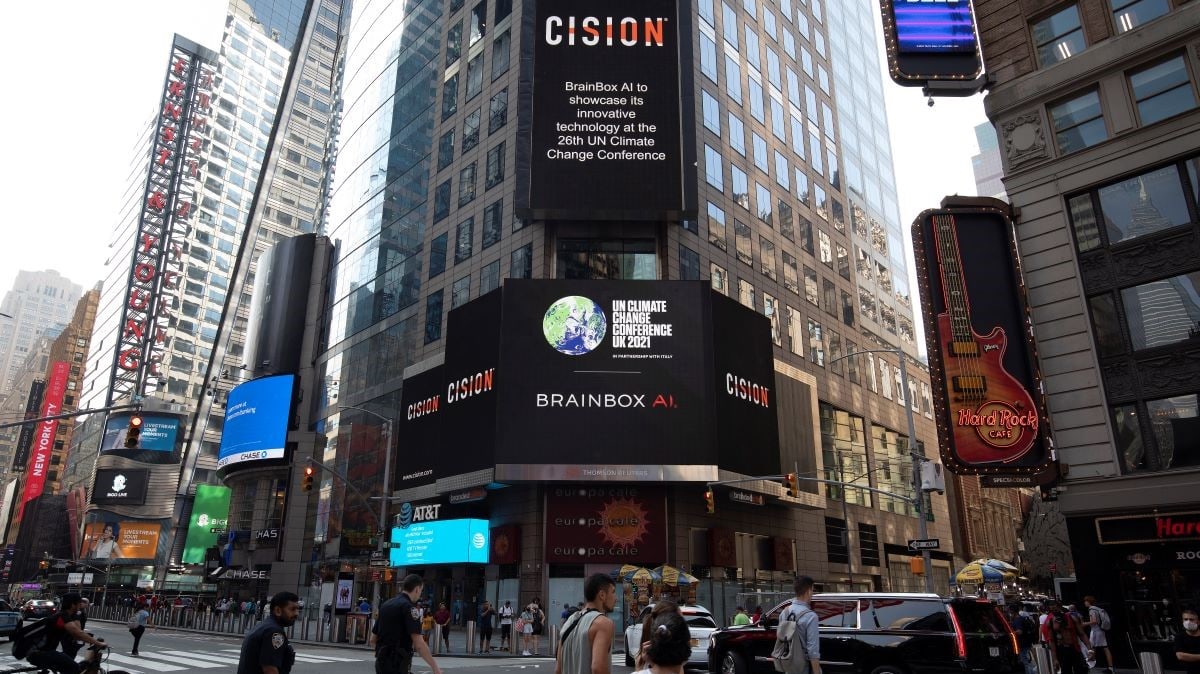 Montreal-based start-up one of ten companies to present at COP26's Tech For Our Planet program, to encourage environmental change and help the world reach its net zero targets.

Montreal, November 15, 2021 – Just after announcing a $24M raise to further deploy its AI technology and fuel global growth, BrainBox AI, a leader in autonomous building technology, shared plans for the future and presented a pilot project of its next innovation at the 26th United Nations Climate Change Conference, COP26. Applying the latest autonomous AI technology, BrainBox AI is developing a solution that addresses the energy transition challenge by creating energy demand flexibility from a cluster of diverse commercial buildings.

To-date, BrainBox AI has transformed over 100 million ft2 of building space across five continents, with a scalable and impactful tool to achieve aggressive net-zero objectives. The technology is installed in both developed and developing nations, addressing the equity, accessibility, and affordability challenges the world faces in its fight against climate change.

The pilot project harnessed the power of BrainBox AI’s core autonomous AI solution to provide electrical grid operators with the flexibility required to create an environment of cleaner, more efficient consumption, and minimize the reliance on fossil fuels. Using existing data from BrainBox AI-enabled retail stores, schools, hotels, shopping malls and office buildings, the company demonstrated the ability of a group of buildings to behave together in order to reduce grid congestion through energy demand management.

The pilot has also shown that sub-groups of buildings can follow separate pre-set load profiles to manage system congestion, reducing the need to expand the distribution networks or add more generation to serve load. By aggregating thermal storage signatures of different buildings, BrainBox AI has created portfolios that are able to sustain a wide array of demand reduction profiles, as necessary to maintain grid stability and reliability.

Most notably, the pilot was selected as the winner of the Tech for Our Planet Challenge from the cohort of ten finalist start-ups selected for their highly innovative climate tech solutions.

“We are extremely excited to have been awarded the top honor at this world stage event, and  express our gratitude for the recognition of our commitment to the fight against climate change.”, said Sam Ramadori, President of BrainBox AI.

While BrainBox AI is well on its way to reaching its net-zero target by 2030, the company’s greater target is to get its customers to net zero via its innovative AI technology.

The Quebec government delegation in attendance at the conference offered senior executives of BrainBox AI the opportunity to discuss the company’s progress and future potential impact on its climate change targets.

“At the Glasgow Climate Conference, we demonstrated that we have many assets for succeeding in our climate transition and even helping other states to do so. One of these assets is the innovative capacity of our companies, and the success of BrainBox AI is an excellent example of this. Thanks to artificial intelligence, energy efficiency offers new potential for reducing our energy needs at the source.” Benoit Charette, Minister of the Environment and the fight against climate change

BrainBox AI’s deep learning and cloud-based computing algorithms produce a saving in total energy costs of up to 25%, a 20 – 40% reduction in carbon footprint and a 60% increase in occupant comfort. Building operators can also see up to 50% extension in the service life of the HVAC equipment.